One of the most recognizable pieces of dialog in the entire Three Stooges body of work is ‘Calling Dr. Howard, Dr. Fine, Dr, Howard!’ from the short Men In Black; which was released today, September 28th, in 1934.


The short was nominated for an Academy Award, the first of many types of awards and recognition that would come their way for their work. 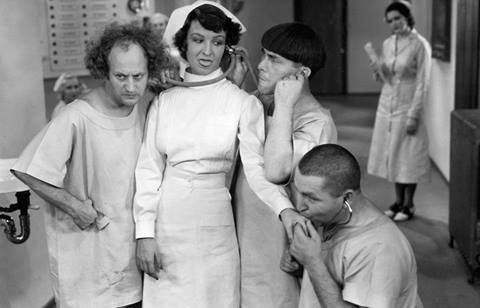 Larry agrees that it is nice to be nominated for such a prestigious award. He recommends this mug to memorialize the nomination and the short. Plus it’s just plain fun! Moe reminds us all that besides doctors, The Three Stooges portrayed a plethora of characters. Interestingly, characters they never actually portrayed give us one of the most popular images. That would be Dewey, Cheatem & Howe! Hey, Moe! Hey, Larry! I did my first Nyuk! Nyuk! Nyuk! in Men In Black! This short is on The Curly Classics DVD Collection. If you want to save some dough, this is the way to go! That’s Soitenly a bargain! DON'T FORGET- THE ENTERTAINMENT SALE IS STILL GOING ON!